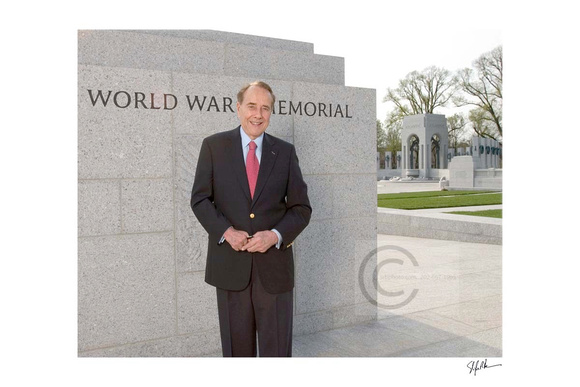 To my surprise, Senator Dole called today out of the blue to say that he was feeling pretty good given he had just had day one of his treatment. I think that he likes to share with fellow patients and I just finished a successful treatment myself.  The grapevine goes deep!  We chatted about the success and professionalism of Honor Flight which is his favorite cause.  His tenacity is considerable and for the first four or five years of Honor Flight, you couldn't stop him from talking about it.  Persistence works!

We also agreed to get down to the WWII Memorial for a photo session when the weather gets warmer.  I'm looking forward to seeing him.  This picture was taken in 2005 for the introductory page of "WWII MEMORIAL: Jewel of the Mall"....still my favorite book and my favorite Senator!

It was taken for  on a beautiful Spring day in 2005. Hundreds of people were strolling by the fenced-in construction area and when they recognized Senator Dole, they started waving.  He couldn't resist and went over to the fence and was pressing the flesh (fortunately for me on the other side of the fence or it would have been the end of the photo session).  After ten--actually twenty anxious--minutes I had to remind the Senator that we had six locations to go and a bunch of notables who also wanted their pictures with him.  At the end of the hour long session, he pointed to my daughter and said that "young lady didn't get her portrait with me."  His attention to detail is amazing and his ease with folks is legendary.