I've had more than a few special moments traveling around the Mall with Honor Flight hubs. In the Arlington Cemetery section of the book, I used this picture from a Stars and Stripes flight as an example of the emotional impact these trips are capable of evoking.  This veteran from Wisconsin was able to take a little side trip to visit his nephew's gravesite. When the WWII Memorial was just completed , we wondered if it was built too late to get WWII veterans to their Memorial.  Along came Honor Flight made of 129 hubs spread across the country in forty two states.  Honor Flight Chicago (left below) just completed its 100th flight to DC.  Honor hubs have moved 250,000 veterans and as many guardians.  There will be a celebration of the event on May 2.

HONOR FLIGHT CHICAGO (LEFT). I have photographed 97 of their flights and done one round trip from Chicago. On the right are scenes of WWII vets visiting the Memorials

Jim Fisher Director of the Korea War Veterans Memorial gave me a tour of the construction at the  Memorial which is due to open in July. When finished it should feel and look essentially the same with the concentration still on the platoon and the big addition a "Wall of Remembrance"--names of the Fallen which will be placed in a circle around the original pool and trees.  It will be more interesting and accessible with the Wall of Names and new entrances and walkways.  I got a look at the construction site and the new wall of names with the next printing. 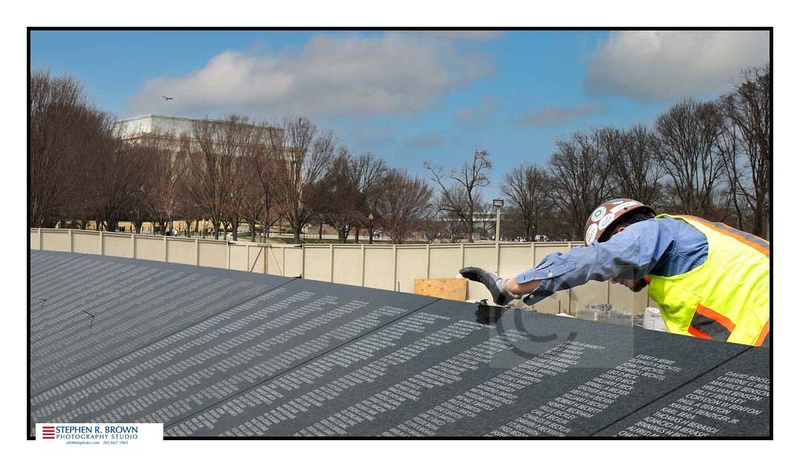 Wall of RemembranceNames of both South Korean and U.S. soldiers killed in the Korean War are engraved in the Wall

The fourth edition will be hardcover and 160 pages retailing at $39.95. They will be sold and distributed through DC PHOTO BOOKS which is connected to the warehouse! I sent out an email to my quantity clients with the discount code on April 2, 2022.

There is already a sale going on on the single books and you can get twenty percent off by typing in "kilroy" as you fill out the shipping information on the website.  This information goes to directly to the warehouse which ships usually same day.  The warehouse is in touch with ever changing shipping prices and aims to achieve the lowest price. They have been excellent advisors regarding shipping and are sympathetic to small enterprises.

Frederick Douglas Memorial BridgeThe graceful lines of the new bridge lead you right to the Riverfront and Maine Street areas of the city.

The Frederick Douglas Memorial Bridge is finished and in the book.  The bridge visually pulls together the Capitol Riverfront and Anacostia neighborhood which is growing at a rapid rate.  I also managed to squeeze some pans of  the Channel area which used to be an old fish market and is now a glitzy waterfront and a restored marina complete with real life Senators! It's so nice that the War College feels threatened by daily leisure boat traffic.  Now I'm thinking since the Officers Club is right on the waterfront, this may be a matter of stomachs rather than security.