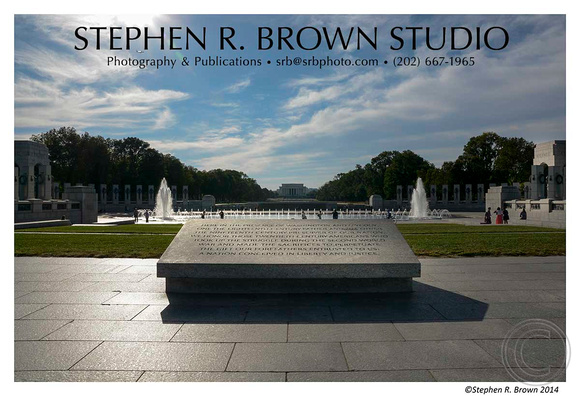 "BUILD IT AND THEY WILL COME!"

The Fall Flying Season is on and Honor Flight Hubs are arriving almost daily.  There are over 136 hubs spread across 42 states.  They all fly several times a year so it's looking pretty successful.   I try to stop by as often as possible as it remains an exciting experience.  As a jaundiced photojournalist, I don't expect much of Washington but the Washington region has stepped up to the plate and let fly for Honor Flight.  Four local hubs greet the flights, and behind the scenes, there are untold and uncounted volunteers like Glen Anderson who resupply the hubs with oxygen . Danielle Sturgis and Kathleen Drennan of DCA Honor Flight Volunteers are organizing not only daily and weekend greeting parties but also "Super Saturdays."  Recently some seven hundred veterans and their guardians were greeted with signs, hugs, handshakes and salutes on one of these Saturdays.  The schedule of "Super Saturdays" is posted on the DCA Honor Flight Volunteer website.

It is refreshing to document the enormous generosity of the thousands of volunteers and organizers and to date, I have almost 34,000 photographs stored in my online image library.  On this particularly hot day,  water was being dispensed to every visitor at the Memorial whether they are part of Honor Flight or not.  Dave Nichols,  board member of Honor Flight, was directing buses , Navy Volunteers lined up to sing and school children held their signs high to cheer the veterans as they entered the Memorial from Homeland Drive .

Let me just point out a few people.  Dawn Jones (lower right) and her husband are at the Memorial regularly as is WWII, Korea and Vietnam veteran and cameraman SPC Peter "Rupy" Ruplemas (left).  His son and daughter-in-law drive him down from West Virginia so that he can sit at the Memorial and enjoy the camaraderie of fellow veterans.  I was privileged to receive a signed copy of his books and was able to give him one of mine.  Tres cool!  Members of the White House News Photographers regularly come down to the Memorial to do stories and recently my "cuz" and world-class photographer David Burnett recently photographed him for an upcoming magazine piece.  Appropriately, David  uses a  prewar 1932 Speed Graphic fitted with an aerial lens. The results should be interesting. 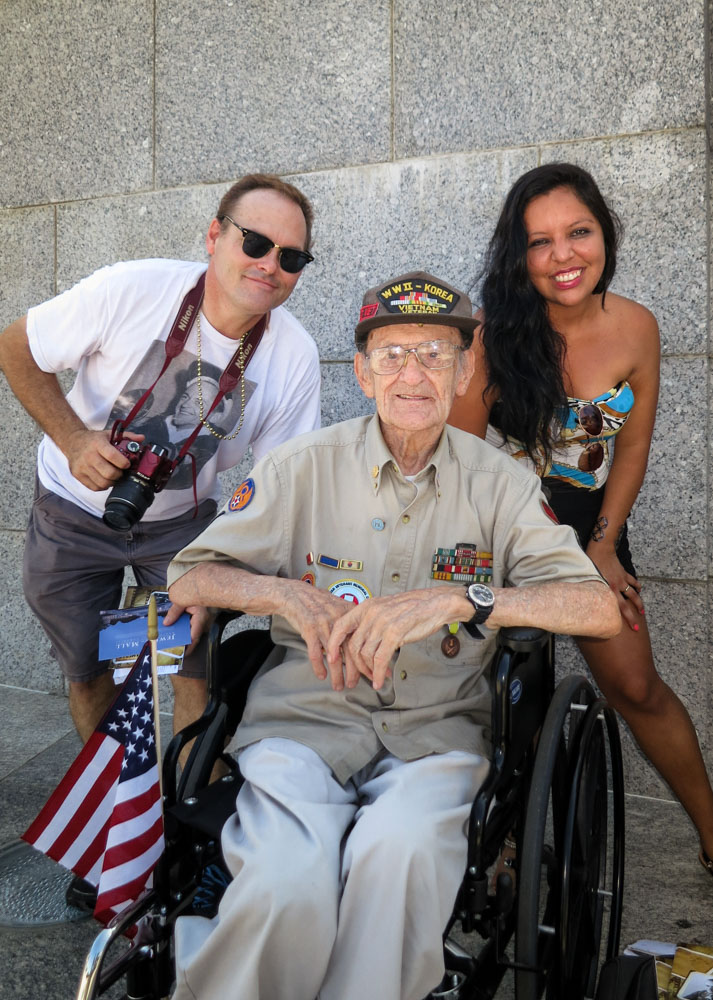 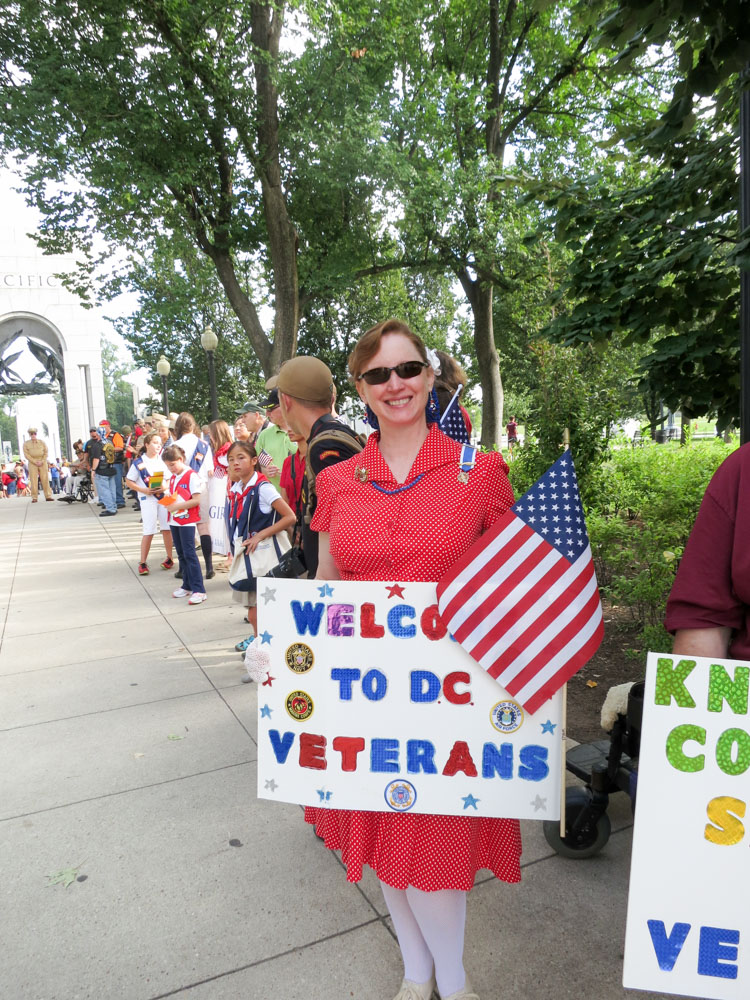 In addition to the WWII Memorial, the veterans spend their day in a variety of DC venues usually guided by a local Honor Flight Volunteer saving the cost of flying a guardian into town. Meanwhile, airport fire crews are filling their trucks with water to spray down the planes for ceremonial arrivals and departures.  Canisters of oxygen and wheelchairs are being moved and replaced as necessary for the many elderly veterans that require it.  Air Crews sometimes come into town with the veterans and the BWI Brownies lead by Keith Gentry and Ralph Brignia back and forth between airports escorting buses. The activity around Honor Flight is absolutely stunning.  It is in fact Monumental! 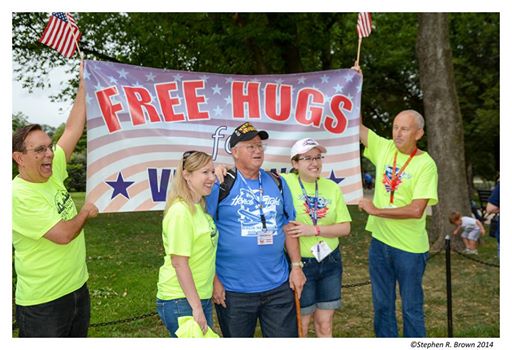 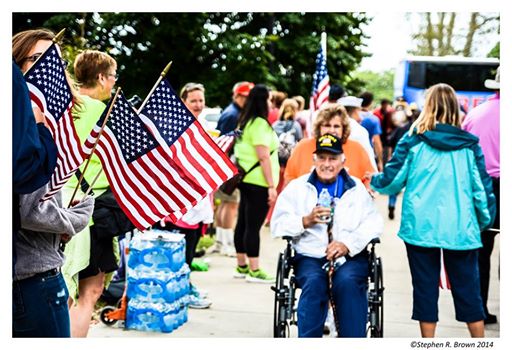 An enormous amount of energy and organization that makes all of this possible.  As I photographed the finished Memorial in 2004,I never suspected that the Memorial would have such a spectacular outcome.  Senator and Mrs. Dole are there on a regular basis.  Jim McLaughlin and Dianne Gressey from Honor Flight Network's National Hub are in town regularly with "Lone Eagle" and "TLC" veterans who join with hubs at BWI.  For a photographer, it's a visual fiesta and below are just a few of the people I see at the Memorial on a regular basis. 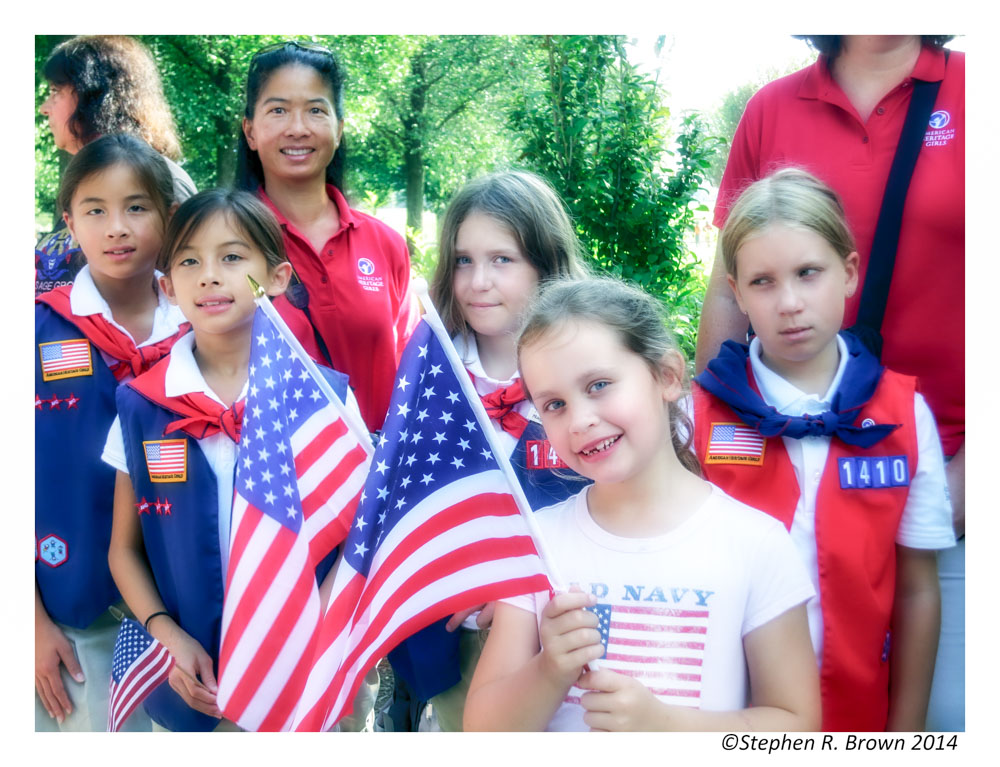 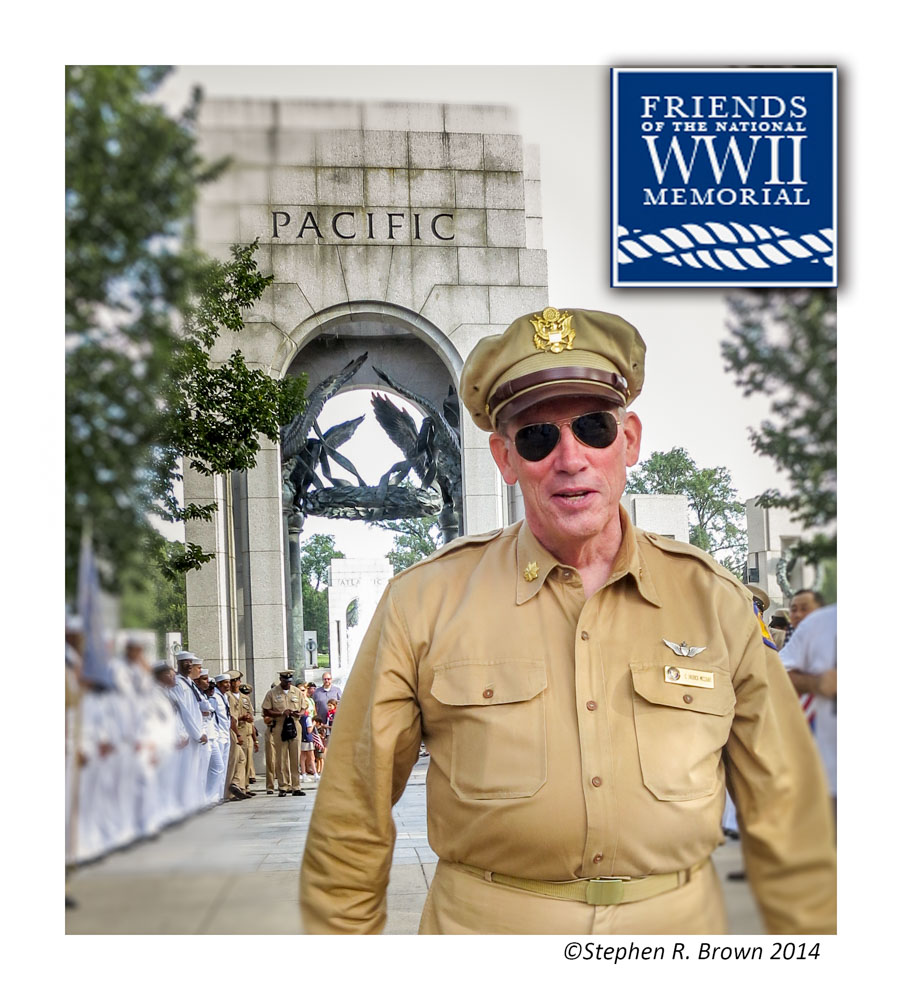 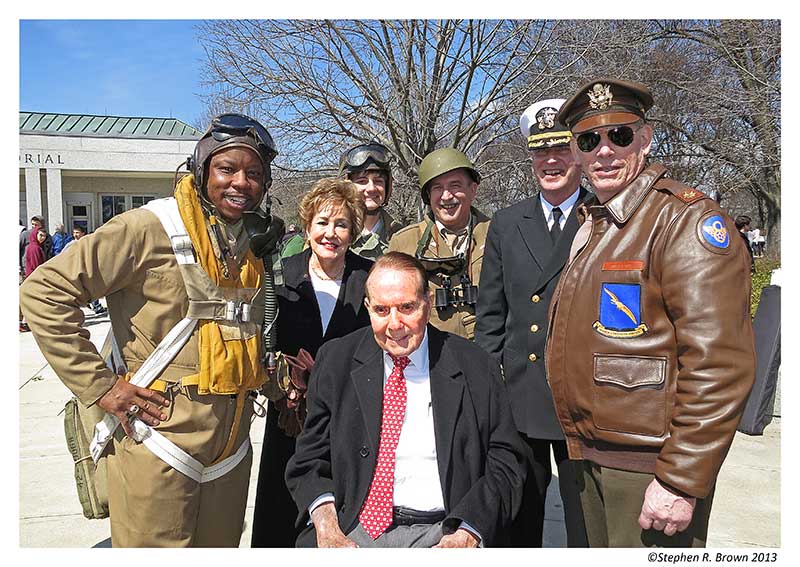 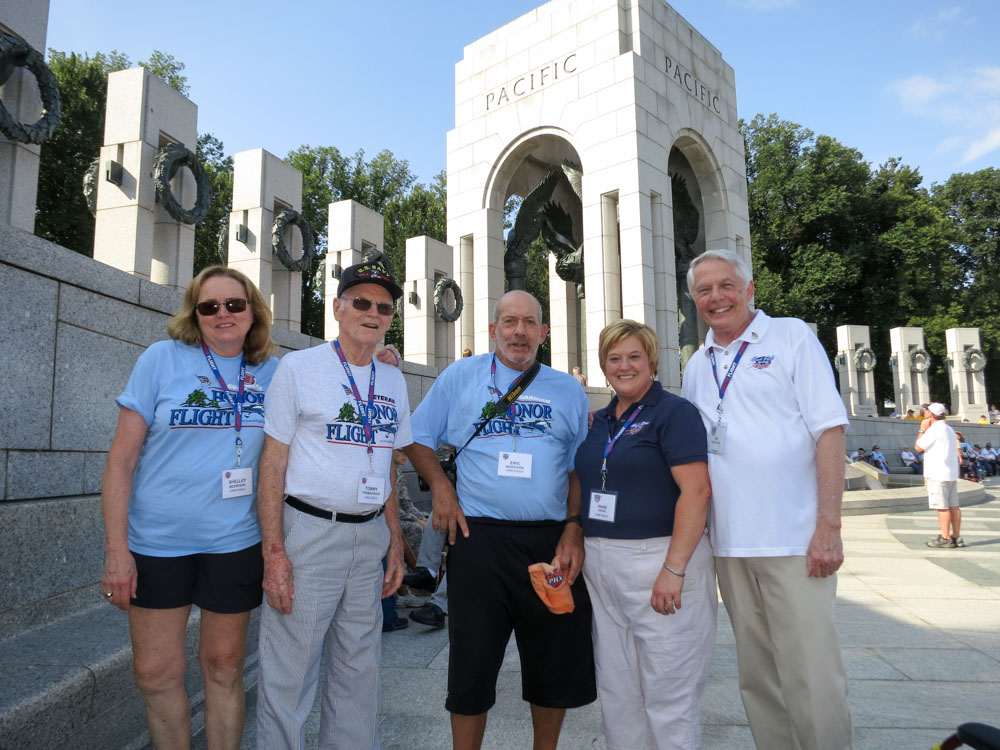 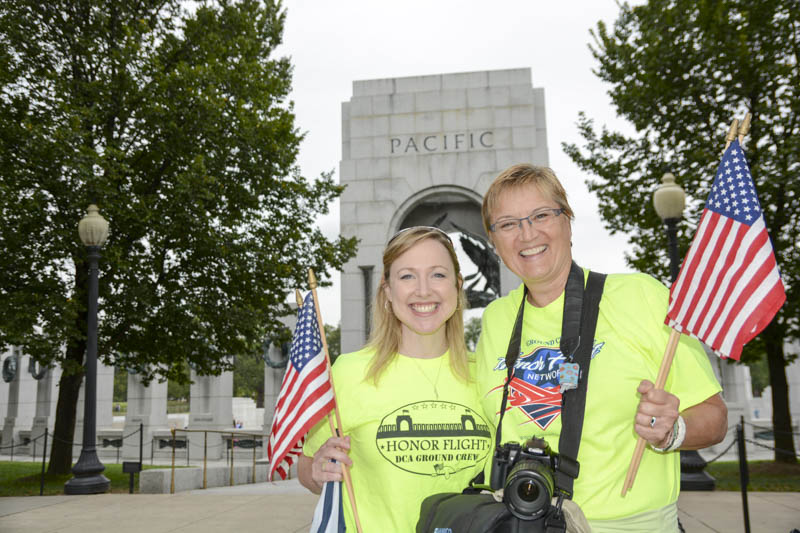 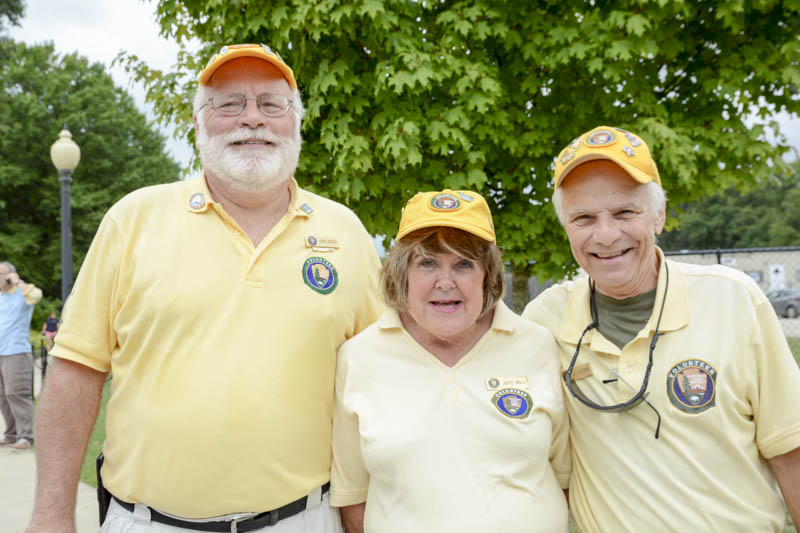 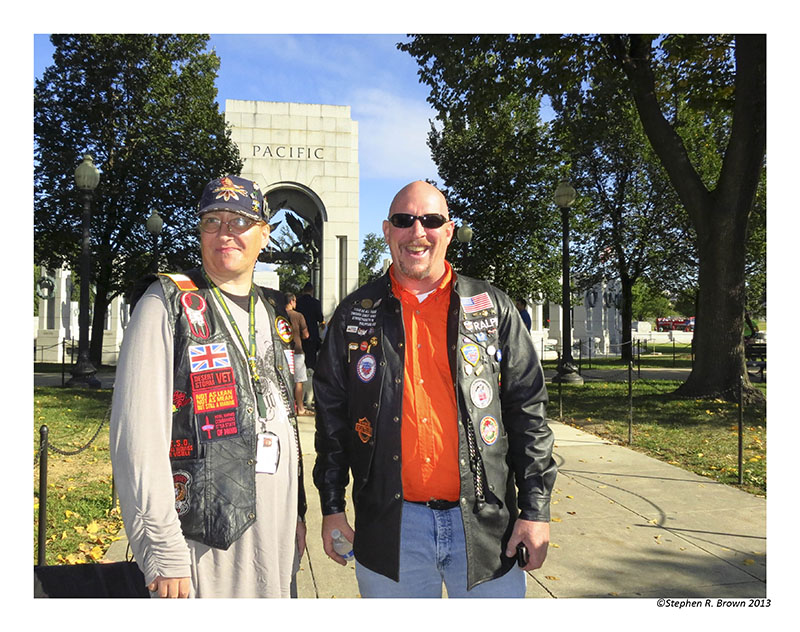 It’s a weekend "happening" for veterans, their children and families. The enormous camaraderie's that has grown up between everyone participating in Honor Flights is amazing.

Friends of the WWII Memorial regularly put on concerts at the Mall and here the Marine Band was playing when Oregon's Honor Flights arrived for a first row seat. 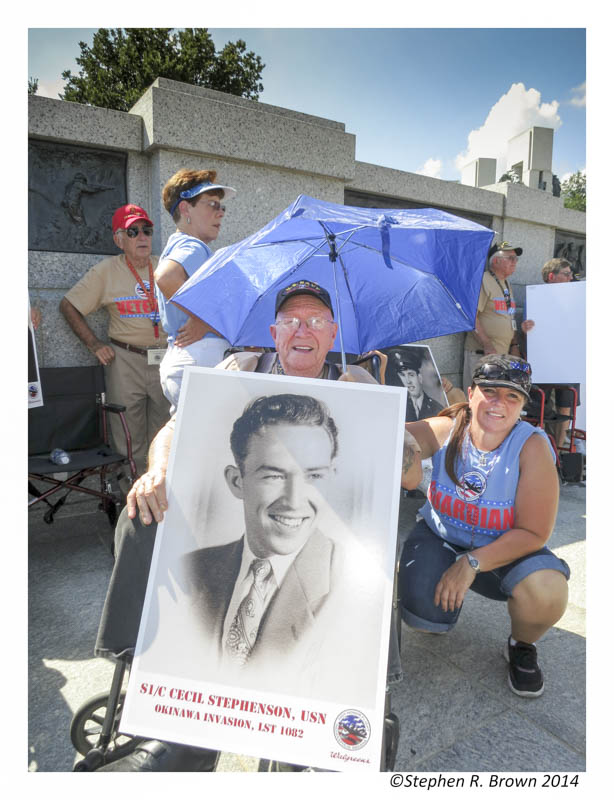 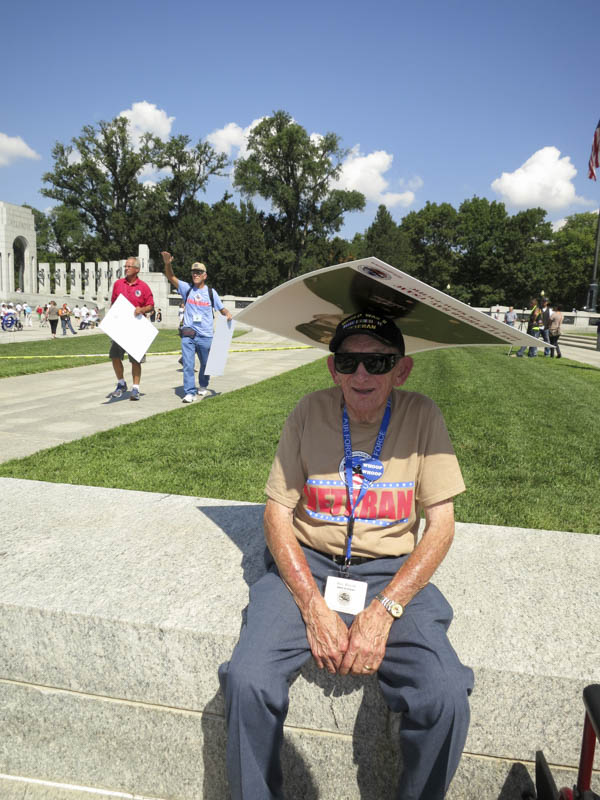 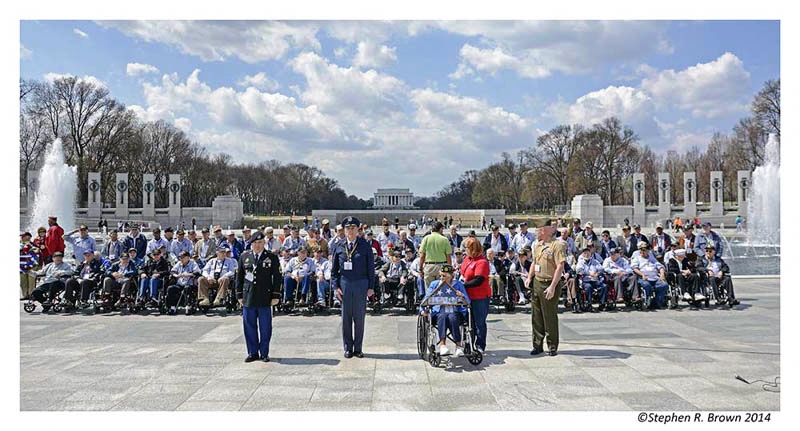 *****I have written a quick essay entitled "Herding Cats" about photographing groups of veterans on the Mall.  I think it's helpful.  Most important is getting it done quickly as it's pretty Sunny out there on the Mall. 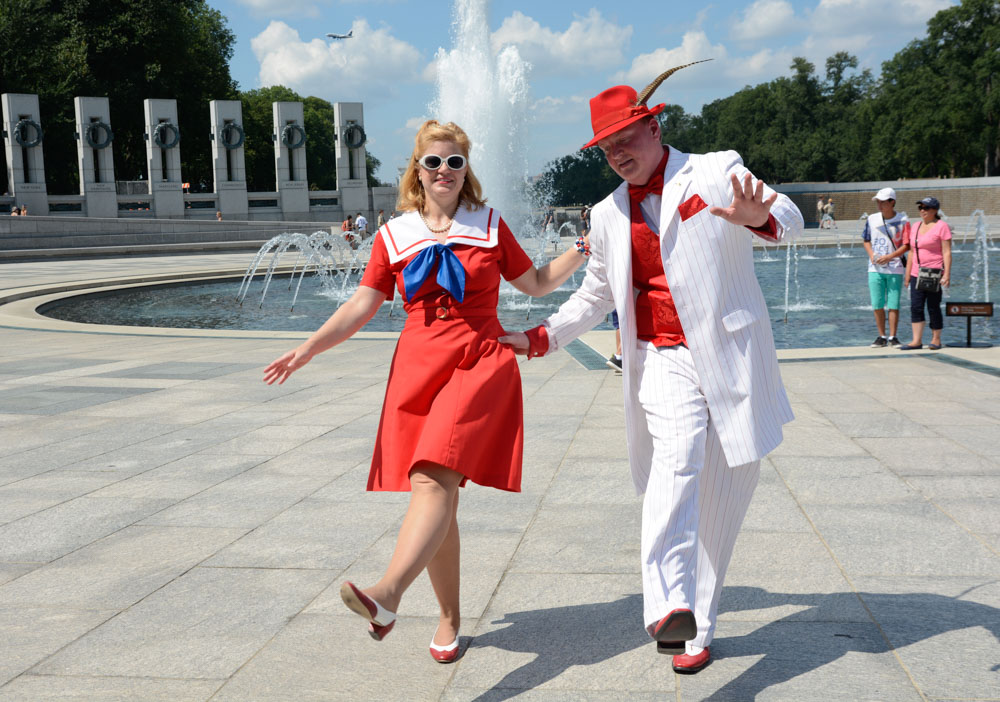 The ever-dancing Theresa Werner and James Martin have amazing energy. They are tireless and had been dancing for several hours when I took this image on a sweltering 94 degree day.

In conclusion, if I don't see you on the Mall this Fall, I hope to see you at the Summit!

The show at the  Women in Military Service For America Memorial will be coming down November 2nd.  I am happy that quite a few of the hubs were able to get by and see it.   Nothing like having the finished product on display.  The Women in Military Service For America Memorial welcome veterans groups for a lunch stop and will prepare the Memorial for your groups' comfort.   It is one of the nicest and quietest places on the Mall and the terrace view is stunning. 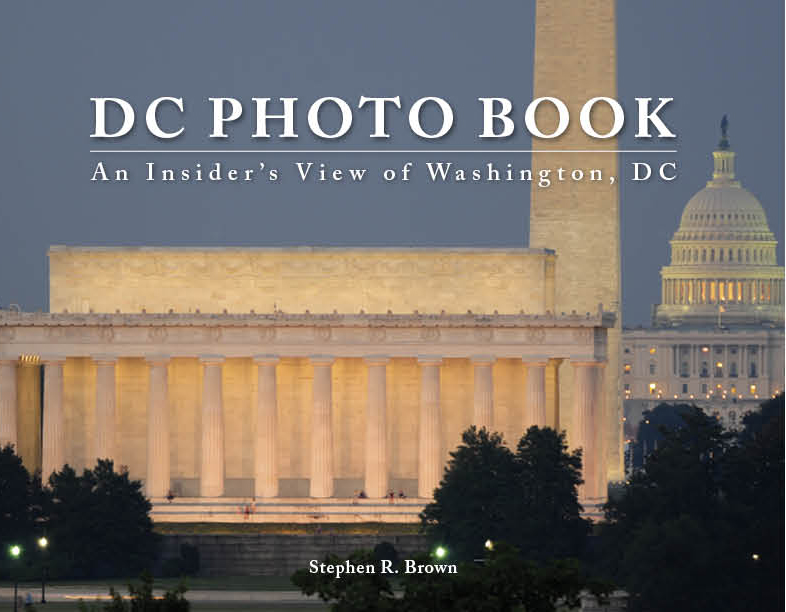 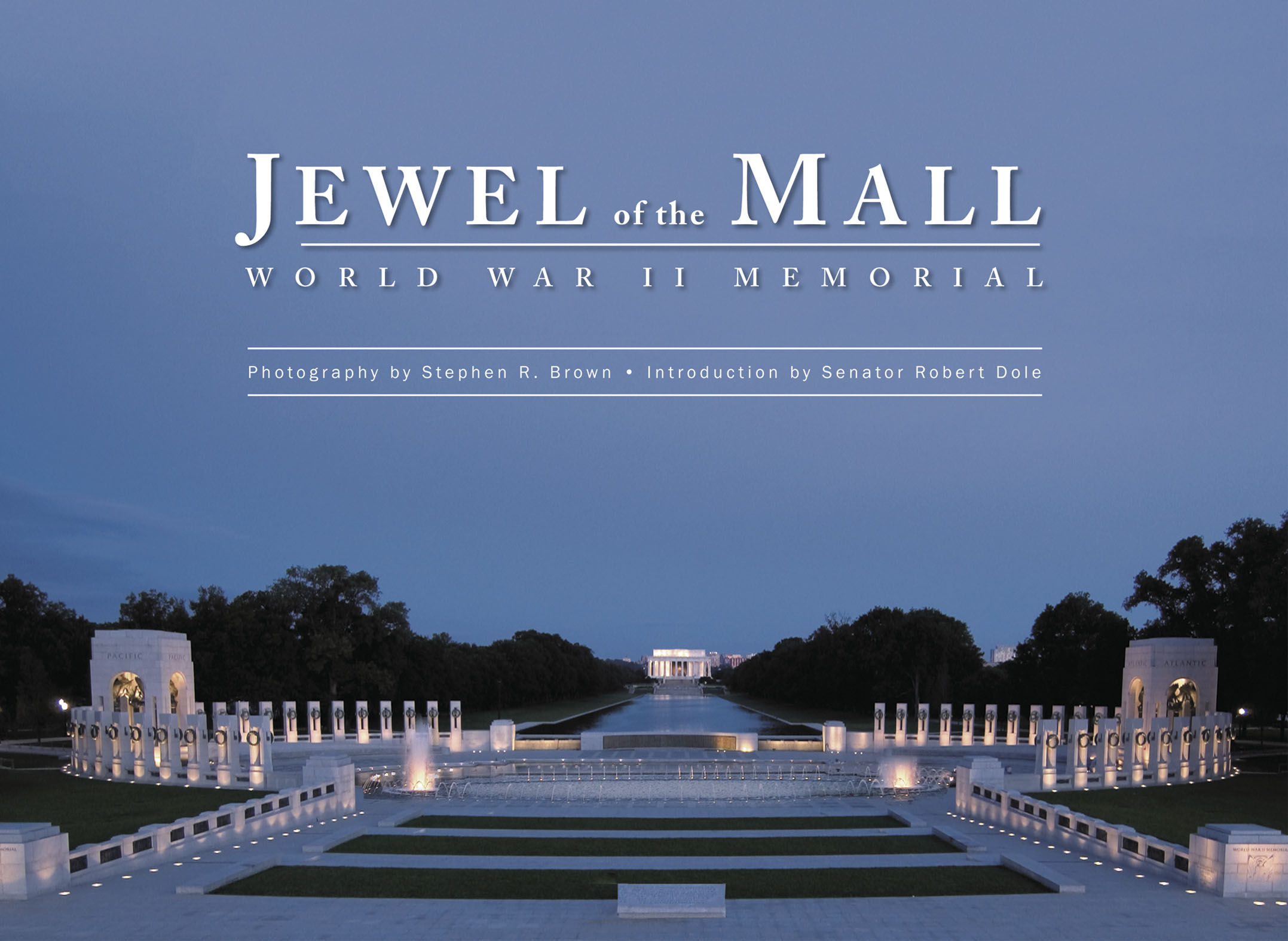 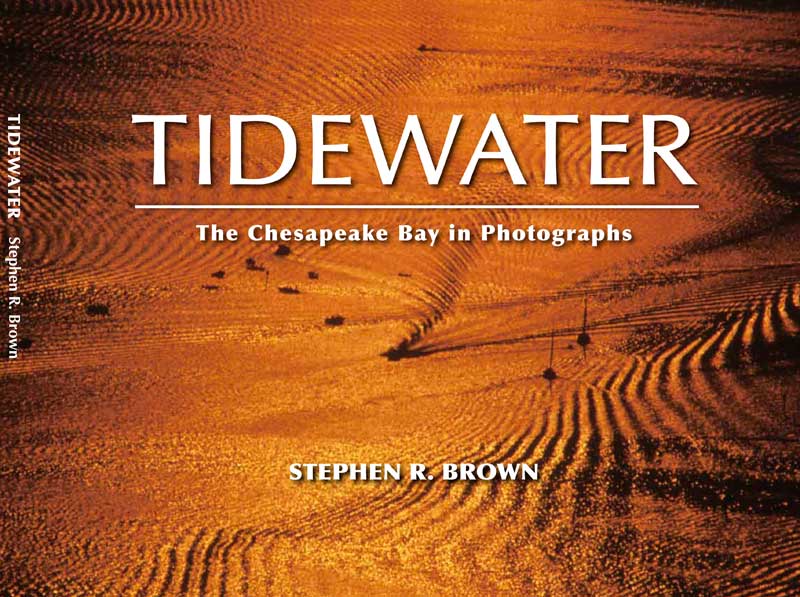 While we have ample supplies of the DC PHOTO BOOK,  I am down to the last few cases of the  WWII Memorial: Jewel of the Mall.  I have just approved the proofs for another printing which will be coming in October 21st. Make your plans now for holiday gifts.  Amazon always carries a supply and if you a Prime member, shipping is free.   My plans for letting Amazon handle case quantities seems to be unworkable so please continue to get in touch with the studio for case supplies.

The Korean War Veterans Memorial poster, which we are donating to Honor Flights transitioning to Korea with the DC PHOTO BOOK, has been reordered due to its popularity.  The poster below is given to only Honor Flights and is not sold with the book at stores or other outlets. 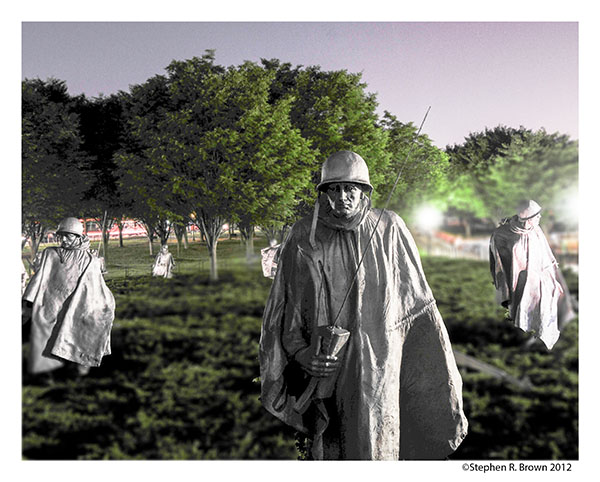 Let me know what you think! As always, join the conversation on Facebook and Twitter.  If you are on Facebook,
please like the Studio site and make sure you register for email updates at the studio.