LAST FLIGHT OF THE SEASONCentral Missouri exits the airport and heads for the Iwo Jima Memorial on their fifth flight of the year.

LAST FLIGHT OF THE SEASON

I met Central Missouri Honor Flight at the airport where once again the DCA Honor Flight Volunteers performed the miracle of fish and loaves by getting the whole airport to stop and cheer while the Missouri veterans transited the airport.  You could sense an elevated positive mood alteration as everyone from shop keepers to travelers had stopped their busy day and were cheering for the veterans. I hang with some pretty well-traveled folks and Honor Flights are everywhere...even in the New York Times which did a great article on Honor Flight.

The impact of Honor Flight extends into the community through travelers, families and countless thousands as they traverse the Mall. This Honor Flight gig could get addictive. Proof of that is our DCA volunteers who are at the airport morning and afternoon for every flight.

We had the good fortune to have Steve Jones as our motorcycle escort.  He is a classic "motorman" and dresses elegantly for a crazy and cold job particularly on this November Day!  With the short day that an Honor Flight hub bas in DC, the escorts save us approximately two hours of travel and parking time. We managed to get to every Memorial of note in six hours and get back to the airport on time.  On a warmer day, we might have lingered a bit but...

Our first appointment of the day was at Arlington Cemetery for the Changing of the Guards.  This Summer, the Tomb has been particularly crowded but it was empty today because of the cold weather.  We had the opportunity not only to see the changing of the guards but also a wreath laying put on by a local middle school. For those of you unfamiliar with this ceremony, the Old Guard changes every hour in the Winter. When Honor Flight veterans are on the scene, they acknowledge their presence by scraping their heels as they go by.  Woe is the person who makes too much noice during the ceremony as a really embarrassing and noisy "dressing down"  follows. 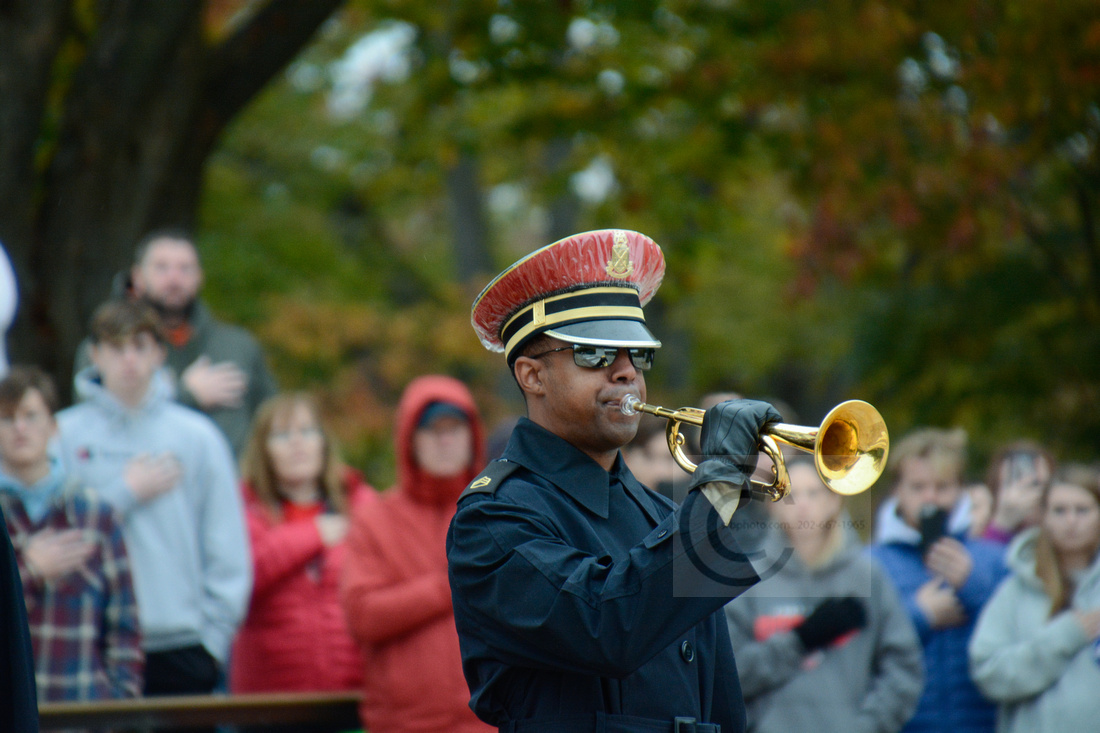 The group portrait is done on the steps of the Amphitheater. I wait for Angela Barnes Barrett to set up the photo and take mine as soon as she's finished.  Good to watch these youngsters do all the work. 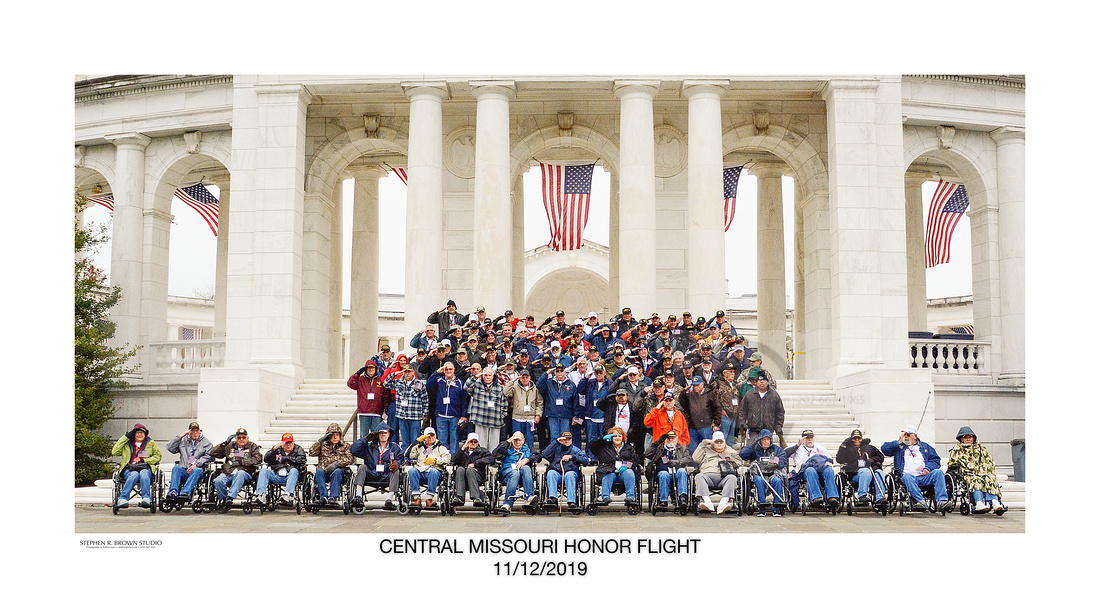 WOMEN IN MILITARY SERVICE TO AMERICA

We had a great stop at WIMSA and Director Donna Houle personally stepped out and gave a tour of the building and registered our three women veterans with their computer database.  The Memorial is under renovation at the moment and will soon have new displays. I am hoping to work on a photographic exhibit of women combat photographers.  Should be cool! 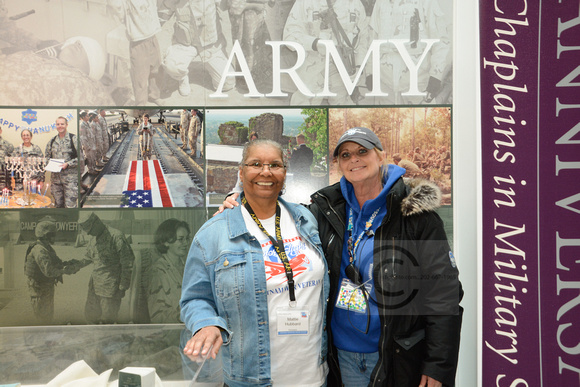 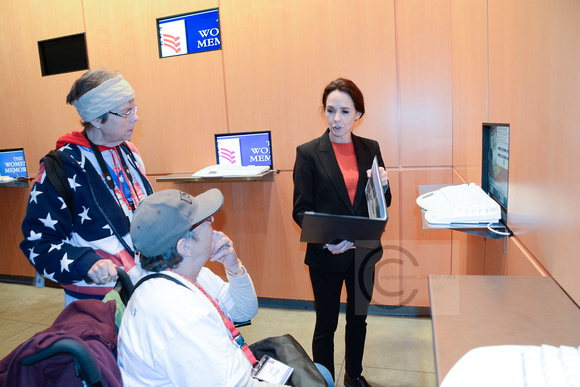 When we arrived at the Iwo Jima  Memorial, Anika Oyen assembled the Marines to honor Elemer J. Dapron who recently passed away. A well-known Jefferson City business man and success story, he gave up his spot on an earlier Honor Flight to another veteran and passed away before he could join us today.  He fought both in WWII and Korea and was ultimately knighted by the Queen.  Pretty interesting for a guy who grew up homeless and taught himself to read.

Anika distributed a handful of black sand from Iwo Jima beach in memory of Elmer. The thimbleful of sand which will soon wash away but our little ceremony will blossom in the memory of all who were present. Each hub has a flavor of its own and Missouri is marked by small moments like this which usually translate into great stories.... of which one Rodney Griffiin is a tale for another time (see the HONOR FLIGHT BOOK)... 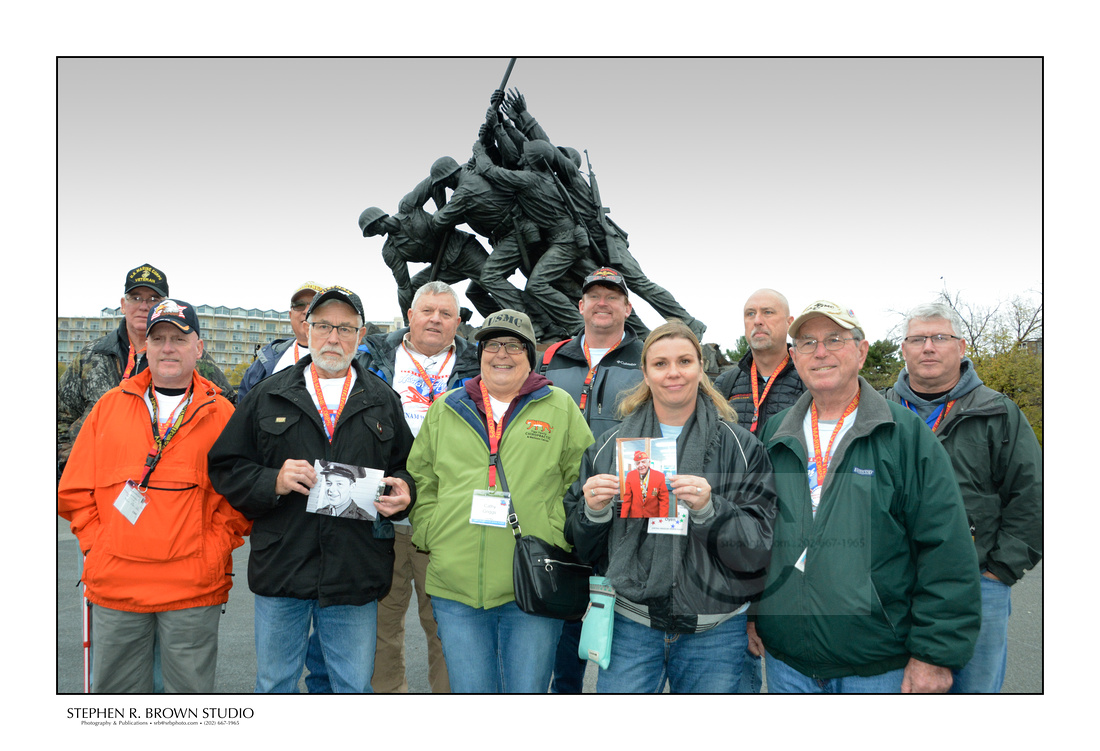 20191112-_DSC1756Anika Oyen distributes sand from Iwo Jima near the basis of the Memorial.

The caravan then took the grand tour around town with a brief stop at the Navy Memorial.  A sailor at heart, I was disappointed to see that the water from the seven seas and the Great Lakes was not in the gorgeous fountains.  We did however get to pose with the "LONE SAILOR" and commemorate a veterans life with a photo. 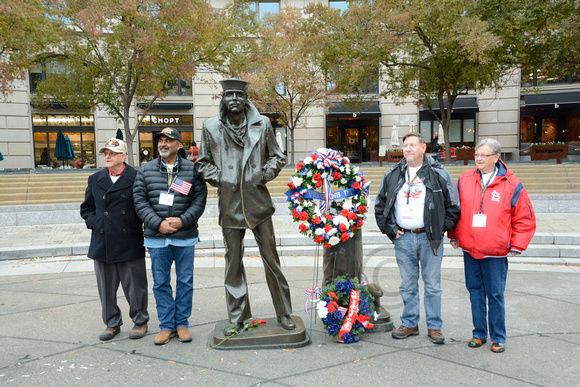 It was absolutely frigid by time we got to the WWII MEMORIAL but we had an hour to get the few WWII Veterans out to see their Memorial and make a few images. 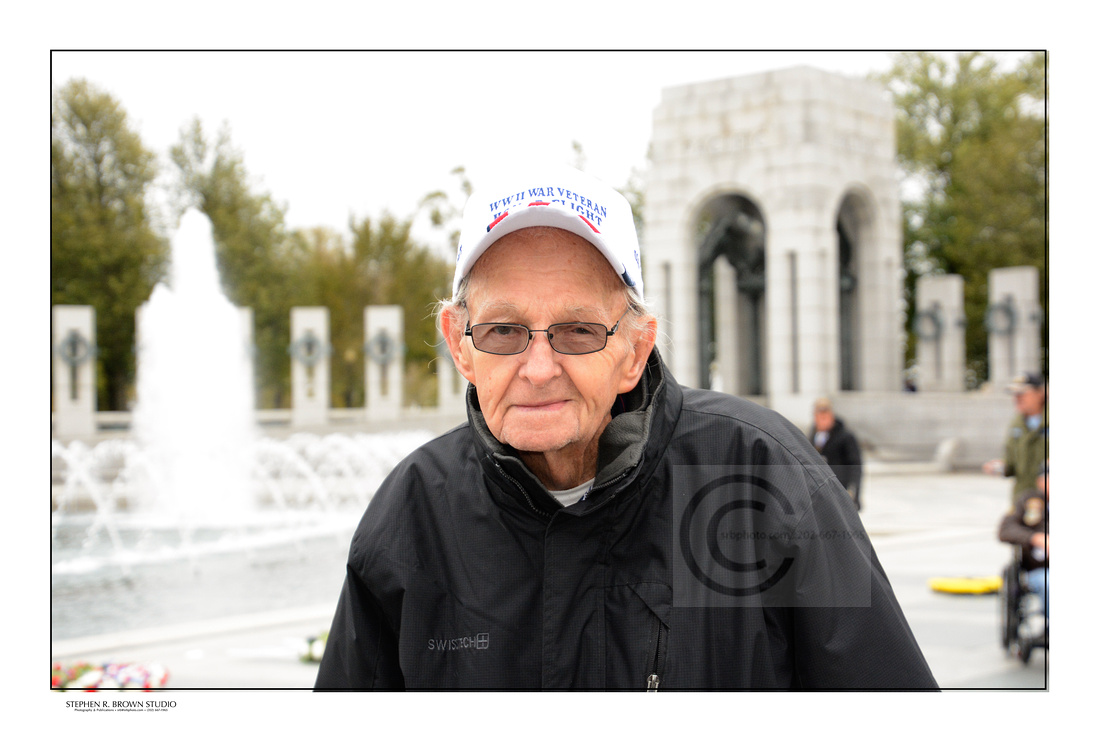 Our next stop was the South circle adjacent to Lincoln and we had choice spots by the concession stand which despite the cold served up a Dove bar...you gotta stay warm! Energized, I wandered over to Korea and began organizing the Korea Veterans who surprisingly had stayed together making this photograph of all of them possible. I spent the remainder of the trip discussing book publishing issues and trying to get a feel for whether the soft, hard and "limited edition" books were most popular.  Publishing on a yearly basis gives me a chance to update and improve the books and there is economy in focus.

I've been reading a lot of Bill Gates and Steven Pinker and will be working on my Honor Flight and DC PHOTO BOOKS publishing projects.  Looking forward to 2021 where we will all be vaccinated and flying.  DC is not the same without you!